It’s time for one of my favorite posts: a top-ten post!

Today I’ll be highlighting my absolute fave visits completed during the recently ended Blog Year 4, which ran from February 8, 2017 through February 7, 2017. There are some goodies!

Seven of the top ten happen to be places located in Detroit, which may reflect my bias toward the city – but in my defense, Detroit does house a boat-load of magical places. And frankly, I’m happy to favor the D whenever I can, because it deserves some love!

So here they are, listed in no particular order [DRUM ROLL . . .]

–The Keep (#273, Detroit): If I brought a stack of books to this dimly-lit, cozy basement bar with a friendly vibe and delicious craft cocktails, I would most decidedly never leave. The Keep is a KEEPER! 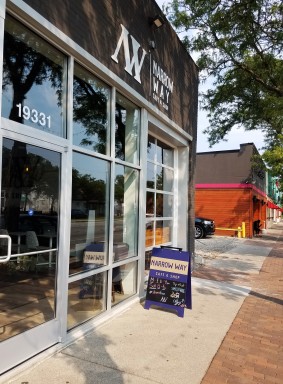 –Narrow Way Café and Shop (#271, Detroit): What a delight this place is! From the beautifully mod, soothing ambiance to the wonderfully friendly staff to the delicious coffee drinks and pastries, I kinda-sorta-most-definitely fell in love with this Avenue of Fashion-based coffee shop.

–Apparatus Room (#274, Detroit): Housed in a former fire station and the current Detroit Foundation Hotel, this chic restaurant is about more than its stunning ambiance: the food is mouthwateringly good (heck yes, Crispy Confit Chicken Sandwich!).

–Axle Brewing (#258, Ferndale): Heaven is . . . a summertime evening spent gorging on some of the best food of your life with friends at a super-sweet brewery (whose beers are pretty damn good, too). 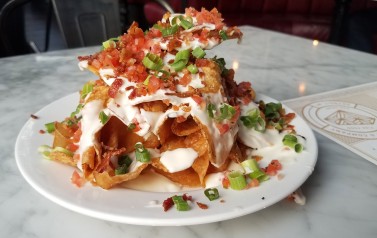 continuous loop à la Groundhog Day, I would not be disappointed if the one that repeated was the day I visited Wright & Co. To be trapped in a scenario where I visit a gorgeously classy establishment with KILLER food and drink again and again and again – yes, please!

–KouZina (#250, Royal Oak): Once I finally visited KouZina, I was like “How have I never been here before?” Building my own signature Greek bowl loaded with fresh meat, rice, and veggies was a legit highlight of my summer. That spicy feta sauce is STELLAR!

–Treat Dreams (#283, Detroit): I’m admittedly not a big ice cream person – unless the ice cream is next-level good like Treat Dreams’ is. The dark chocolate variety with sea salt and olive oil that I had on my birthday there was a revelation. Now THAT is ice cream! 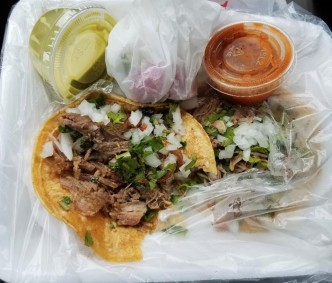 –Taqueria el Rey (#286, Detroit): The carnitas tacos I got from this unassuming Mexicantown restaurant were unequivocally the best tacos of my life thus far. I cannot emphasize enough how amazing they were, so fresh and juicy and flavorful, with that creamy jalapeño sauce . . .. They are the MIC DROP of tacos! They are a shining example of the wondrousness that can be found when venturing outside of the familiar and into the unknown – and why I adore working on this blog so much!

I love doing these reviews of recently ended blogging years because they give me an opportunity to geek out over stats about the kinds of places I’ve visited for 100 Places in the D over the last year, which I find so, so fun. So I’ll dive right in and chat about Blog Year Four, which ran from February 8, 2017 to February 7, 2018 (I base the blogging years around the anniversary of the date of my first visit for 100 Places in the D, which was February 8, 2014).

I’ve gotten into the habit of creating goals for myself for each blogging year, and my goals for Blog Year Four were as follows:

–Visit 71 new places, so I can hit 300 overall visits since the blog’s inception.

–Have at least 12 of those visits be to establishments located in new-to-the-blog cities (cities in the tri-county Metro-Detroit area that have not yet been represented on 100 Places in the D).

–Visit at least 20 places in the city of Detroit itself (because I heart going down to Detroit, and this blog is after all named 100 Places in the D, so I want it to be the city I represent the most).

I’m happy to report that I achieved all three of these goals! I visited 76 total new places in Blog Year Four, hitting 305 total visits for the blog. Twenty-five of those visits were within the city of Detroit. And I visited these 12 new-to-the-blog cities:

That being said, I only have one official goal for Blog Year Five – but it’s a big one, and I’m very excited about it. In Blog Year Five, I plan to [DRUM ROLL. . .]: Visit 50 new places in the city of Detroit!!!!

Yes, 50 new places visited in Detroit alone from February 8, 2018 through February 7, 2019! It’s a HUGE endeavor – an average of about one visit per week to Detroit – but I’m psyched for the challenge.

I LOVE Detroit; I love visiting it, and while driving around its streets with their oft-confusing mash-ups of one-ways and circuitous routings periodically throws me into near-panic-attack mode (driving is SO not my fave thing in the world), I believe that with intention and planning, I can totally achieve this goal.

I considered making the goal to actually visit one new place in Detroit every week of the blogging year, but that quickly felt too restrictive. I realized that I didn’t want to put myself in a position where I felt like I must go downtown every single week, even when it didn’t make sense: to feel compelled to sit in rush hour for over an hour post-work on a Tuesday to drive 30 miles downtown, pay $10 for parking, and spend half an hour eating a sandwich bought somewhere convenient before again entering the thick traffic on my pilgrimage back home just so I could get a visit in for the week (as I found myself attempting to do this Tuesday before opting for the blessedly more flexible goal). I never want going downtown to feel like a chore; I want it to feel like the magical foray that it is.

So that’s my big ol’ goal for Blog Year Five! In case you’re interested in a geographical breakdown of where the 76 new-to-me restaurants, bars, shops, venues, parks, and the like I visited in Blog Year Four were located, the following stats provide further illumination (I love nerding out to this stuff!):

Detroit: 25 (nearly one-third of all the visits!)

Look out for a related Blog Year Four post to drop next week showcasing my top-ten fave visits of the 76 achieved over the last year (always a fun round-up!).