I visited Thailand in January of this year and became enchanted with one of its signature drinks, the Thai iced tea – a yummy concoction of black tea and sweetened condensed milk. I’d not had one of those delectable babies since being back in the states and had vowed all summer that I’d hunt one down here at home.

It took me until a Sunday afternoon in late September (LOL) to finally focus on this objective. At least I achieved it before summer was officially over – and at least the weather was sunny and summer-like, with a high temperature in the upper 80s.

My Thai iced tea break at Tou & Mai occurred after a browsing session of shops – including Hugh, Source Booksellers, and Nora – in the Midtown/Cass Corridor area of Detroit.

While I knew exactly what I wanted, I browsed the tea shop’s menu while waiting in line. Tou & Mai’s signature offering is boba tea (also known as bubble tea), tea drinks with chewy tapioca pearls and/or jellies added to them.

Tou & Mai isn’t simply a boba tea shop; it’s also what it refers to on its website as an “Asian Mini Mart,” offering grocery items from Southeast Asia such as candy, cookies, condiments, and noodles. It’s also a place that celebrates the owners’ Hmong heritage, selling embroidered, hand-crafted goods made by Hmong artisans.

The Hmong people comprise an ethnic group with its origins in Southeast Asia. I’d admittedly been ignorant of the Hmong’s existence until a few months ago, when I watched an episode of CNN’s United Shades of America featuring them and their story.

The Hmong were recruited by the U.S. government to aid America in the fighting of the Vietnam war. Post-war, many of them fled their homes in fear of persecution for being American allies, and some ended up in the U.S., including here in the Metro-D. According to Tou & Mai’s website, a small Hmong community still exists here today.

So Tou & Mai is much more than the place that quite deliciously satisfied my appetite for Thai iced tea on a sunny September Sunday: it’s a boba tea shop/grocer/celebrator of culture. And it’s definitely worth a visit! 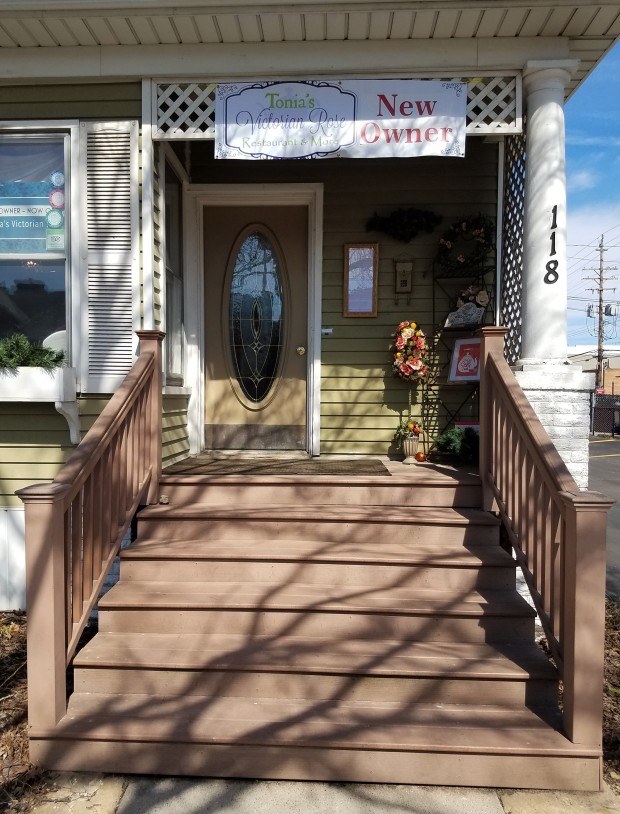 Happy Friday, guys! I hope you’re looking ahead to a weekend open to much fun and exploring. I’ve got some good plans on the docket for the next few days, including visiting a brand-spanking-new local brewery tonight (counting down the minutes until happy hour as I type!), so look out for more new posts soon.

Today is all about my recent lunch visit to Tonia’s Victorian Rose, a tea room located in downtown Rochester.

OK, so I know the term “tea room” is probably not the most ear-perking one for many of ya, but let me assure you, Tonia’s Victorian Rose is straight-up delightful. A coworker treated me and another gal to lunch there Tuesday, and once I stepped into its soothing lilac-walled, sunshine-kissed, vintage-tunes-infused, grandly-grandmotherly interior, I didn’t want to leave. I was like, “Can we go get our laptops and hunker down with pots of tea and work here the rest of the afternoon?” Seriously – because pretty much this joint is the antithesis of my corporate day-job office. It has good vibes, is what I’m saying.

As you’d expect, the menu of Tonia’s Victorian Rose showcases a multitude of teas, including intriguing flavors such as Acai Pomegranate Blueberry Green Tea and Lavender Earl Grey as well as various decaffeinated options. I enjoyed a pot of decaf Earl Grey.

And the food there was great! I appreciated the selection offered, which surprised me for a tea room menu. I expected the few typical choices: chicken salad, mini sandwiches of the cucumber and egg-salad varieties, the requisite scones. And yes, there are chicken salad and scones on the menu, and you can get trays of those OG mini tea-party sandwiches if you make a reservation ahead of time. But there are also: sandwich varieties that you might not expect, such as the Italian Chicken and the Grilled Veggie Focaccia; crepes of both the sweet and savory varieties; two kinds of quiches; pot pie; and several soup and salad choices.

I ordered the Extreme Victorian Rose Salad, a mash-up of two of the salads on the menu, the Cashew Chicken and the Victorian Rose. To be honest, I was confused about what I was ordering; I somehow missed that the Cashew Chicken Salad was a chicken salad of the aforementioned chicken-mixed-up-with-mayonnaise variety. I’m generally not a fan of chicken salad, so I was bummed by my misstep. But I ate it, and let me tell you: it was excellent! I loved the raspberry vinaigrette on the leafy part of the salad, the cashews mixed into the chicken-salad part, and the juicy mandarin oranges. The dish also came with a cranberry-orange scone accompanied by this awesome whipped butter with orange zest mixed in.

And then, there was dessert! Yes, the menu of Tonia’s Victorian Rose also offers various desserts, such as the rose-flavored ice cream topped with a dried (and edible) rosebud we enjoyed as a palate cleanser and conclusion to this tasty and tranquil meal.

I had today off from work for Martin Luther King day, so this afternoon seemed like the perfect time to be leisurely ladies who lunch and visit Just Delicious Scones. For a set price (under $12 a person for us) you can have tea, a plate of the most delicious scones, and lunch of either quiche or chicken salad. I am not a quiche or chicken salad person, to be honest, but I chose the quiche, and it wasn’t bad (I don’t like eggs, but I was surprised to find it wasn’t really that eggy tasting), and it came with a delicious little side salad. And I ate either four-and-a-half or five-and-a-half scones – I lost count! Soft, delicious scones of all different flavors are offered, with Devon cream and lemon curd to top them – yum! I ate so much I got a stomachache. So watch out for that part!

I loved Socra Tea. It is exactly the kind of cozy, ambient place where you can relax and chat with a friend or get your focus on. The tea is delicious, but I think what I liked best about the place is that there are so many offerings by local artisans for sale here, from pottery and hand-crafted notecards to silk-flower barrettes and quirky stuffed animals with plastic doll faces. The display of local creativity is very heartening. Check out the website below – you can buy some of these wares online, too.

My friend and I stopped here for tea on a very blustery day that completely felt like the beginning of winter (I can’t believe it’s November already! How is that possible?). The place was incredibly charming inside, and I enjoyed the whimsical tea settings used.

Mad Hatter isn’t just about tea – it’s a restaurant and bar, too. But I would love to get a group together and come back for the traditional English tea, which features finger sandwiches and scones and clotted tea and everything (and is by reservation only).

A super-cozy place to enjoy a delicious cup of tea. I can already see myself here in my sweatpants with a book on a chilly January evening.