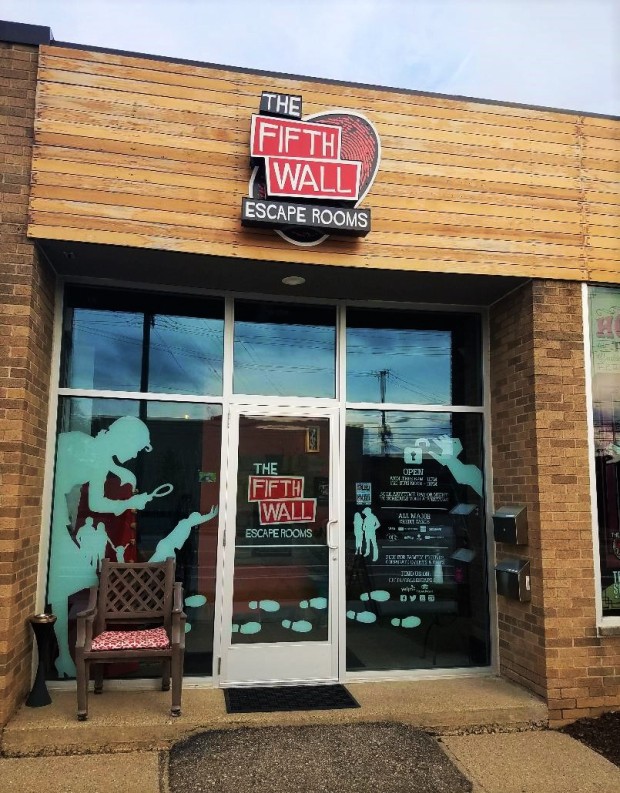 In the first week of October, it was that time of year for me again: BIRTHDAY TIME! Celebration was obviously in order, and a visit with friends to The Fifth Wall Escape Rooms in Ferndale kicked off the festivities.

I’d been wanting to try out an escape room for a while, and while checking out the local options, I ran across The Fifth Wall Escape Rooms. It intrigued me right away, as it’s a locally-owned establishment with rooms that incorporate Michigan elements and with themes that seemed much more creative to me than those of the downtown-based branch of a national escape-room chain heavily advertised on Google.

The three rooms to choose from at The Fifth Wall Escape Rooms at the time (and as of the writing of this post) were The Purple Gang (billed as an “introductory escape room” on the Fifth Wall website; it gives an abbreviated escape time of 25 minutes); The Harry Houdini Trap; and Weirder Stuff, a creepy caper held in a cabin in 1980s northern Michigan.

I opted for the Weirder Stuff room and recruited five friends to join me in the one-hour escape extravaganza.

When we entered The Fifth Wall Escape Rooms at the time of our booking, we were greeted by two guys who I assumed were the owners and given an introductory explanation of the room parameters: the rules, point system, etc. We were being given one hour to crack the numerical code that would allow us to escape the room, though we had the option to stay in the room beyond that point (until the full hour was up) if we wanted to continue to solve the full puzzle and earn additional points. Our group of six would have the room to ourselves, as we were the only ones to book it during that timeslot (the Weirder Stuff room holds 10 people).

We then watched a short introductory video giving us further context on the mission we were about to embark on and were ushered into our escape-room scenario.

The configuration of the room, as well as the puzzles presented within it, were much more elaborate than I’d expected. I don’t want to give away any of the elements of the room or its storyline, so I’ll simply say that it’s obvious that a lot of care and creativity were poured into the crafting of this room by The Fifth Wall team and that they did an excellent job creating an immersive experience. Also, the spooky/supernatural elements of the Weirder Stuff room make it an ideal outing for Halloween season.

After about 52 minutes of intense sleuthing, our group cracked the code that would let us out of the cabin we’d been locked within! We, however, decided to spend the remainder of the hour attempting to crack the full puzzle of the room.

We fell short. It was a bummer to gain peak momentum in the last 15 minutes of the challenge and not be able to see the full exercise through – but that’s how the escape-room game goes!

At the end of the hour, our hosts entered the room and gave us feedback about how we did and answered some questions we had about puzzles that stumped us. They said we’d gotten a lot farther in the Weirder Stuff room than most groups did, which made us feel better about the endeavor of which it seemed we’d just started to scratch the surface.

The Fifth Wall guys had also popped in aurally via a loudspeaker during the challenge to give us hints when we’d been stuck on certain elements, which was helpful.

My takeaway from my first escape-room experience was that it was much more challenging than I’d expected (I definitely had moments of feeling like the whole thing was over my head during the Weirder Stuff room) but super entertaining. I was pleased at how well my friends and I worked together; it was fun to participate as a team in such a novel experience. The Fifth Wall Escape Rooms, thanks for helping me kick off my birthday celebration in such an enjoyable and engaging way!