Happy New Year’s Eve! While as of the date of this post it’s the very last day of 2018, here at 100 Places in the D, we’ll be exploring the year almost-past for at least a few more weeks (because somebody get a wee bit behind in her blogging).

Today it’s all about Honest John’s of Detroit! I visited the Midtown/Cass Corridor-based establishment after a tour of the Motown Museum back in November. Hungry and not wanting adventure-time in Detroit to end, I decided to hit Honest John’s for lunch.

The restaurant had been on my radar for a while. I’d envisioned it as a diner, as I knew it opened early (at 7 a.m. Mondays through Saturdays and 9 a.m. on Sundays) and served hearty breakfasts and other comfort-food fare. When I walked into its crowded interior that Saturday afternoon, I realized I’d been mistaken.

Honest John’s is most definitely a bar – a gloriously down-to-earth pub whose ceiling was festooned with colored twinkle lights (presumably in honor of the holiday season) and walls adorned with neon-light signage. While it opens early, it’s also open nightly until 2 a.m.

The neon-light signs spell out sayings like “Sobriety Sucks” and “Men Lie” – adages that doubtless tie in with the honesty theme of the bar’s name.

I found myself getting cold feet about eating lunch alone in that crowded bar – until I spied an open two-top table in the corner of the restaurant and reminded myself that I am indeed badass enough to dine solo. (We all are – how did fear of eating alone become a thing in our society, anyway? I mean, it is truly the least of our worries.)

My server was great: friendly, prompt, and polite. I perused the brunch menu and gave him my order of the Eastsider sandwich (essentially a Reuben, which is also on the menu; it subs out the sauerkraut for coleslaw), side of curly fries, and a hard cider from Starcut Ciders (which I’d not heard of previously but which I learned is a hard-cider brand owned by Michigan-based Short’s Brewing Company).

The sandwich and fries came out quickly, and they were BOMB! That Eastsider sandwich was so delectable with its layers of tender corned beef, melted Swiss, crunchy coleslaw, and creamy Thousand Island dressing nestled between buttery toasted rye bread . . . Mmmmmm. Writing about it is totally bringing me back to that glorious moment of consumption!

The portion sizes of both the Eastsider sandwich and the curly fries were ample, and I was easily able to save half of the sandwich and fries to take home with me.

I left Honest John’s with a happy heart and stomach, thrilled to have discovered yet another awesome restaurant/bar in the city and eagerly anticipating my return. I would say I’m excited to further explore Honest John’s food menu; it offers a wide array of breakfast items, sandwiches, burgers, and enticingly calorie-laden appetizers (hello, chili cheese fries!). But the truth is, I can’t wait to have another brush with that Eastsider Reuben – it’s perfection! 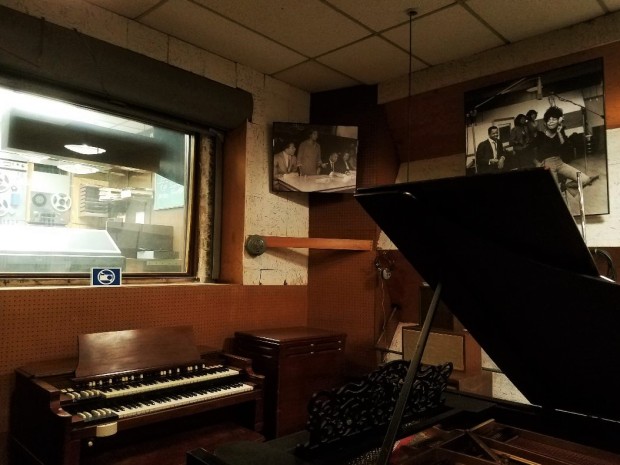 After three-plus weeks away, it feels great to be back on 100 Places in the D, highlighting some Detroit goodness!

I didn’t mean to take nearly a month’s hiatus from the blog. But between preparations for the holidays and cray-cray busyness at my day job, it happened – and here I am, on one of the very last days of the year, writing a post for a visit I made over Thanksgiving weekend.

But what a visit it was! On the Saturday after Thanksgiving, I jaunted over to the Motown Museum in Detroit to soak up its historical vibes.

I almost didn’t make the 11 a.m. tour I’d purchased tickets online for earlier that morning, due to foolishness on my part (a.k.a. failing to factor in time for parking). Worth noting: the Motown Museum doesn’t have its own parking lot, AND it’s adjacent to a funeral home – which was hosting a visitation on the morning of my visit. So street parking near the museum was scarce.

The good news was that there was metered parking available along West Grand Boulevard, the street on which the Motown Museum is located. I ended up parking across the street and down a ways, near Henry Ford Hospital. From there, it’s only a few minutes’ walk to the Motown Museum.

I scrambled into the museum and up to the ticket counter to check in. Fortunately, I was only a few minutes late, and the staff was kind enough to let me join the tour, which had just started.

I was surprised to find a group of about 20-something people on the 11 a.m. tour, including people from England and Germany and Americans visiting from out-of-state locales. Of course I shouldn’t have been surprised, given that the museum and the Hitsville U.S.A. building at 2648 West Grand Boulevard that it features has a big reputation, having been the birthplace of Motown Records, that venerable music label that produced major acts such as the Supremes, Stevie Wonder, the Jackson 5, and Smokey Robinson.

The tour, which lasted about an hour, included a video presentation, viewings of Motown-related memorabilia (including one of Michael Jackson’s famous black fedoras and signature glittery gloves), loads of interesting facts, and walk-throughs of Motown founder Berry Gordy’s former living quarters, the preserved lobby of the Hitsville U.S.A. building, and the famed Studio A recording studio, where our group got to sing and dance along to a few bars of The Temptations’ “My Girl.”

After my visit to the Motown Museum, I’m in awe of what Berry Gordy has achieved. Within years of convincing his family to loan him $800 so that he could start Motown Records, he was making millions and fostering some of the biggest musical acts in the world.

Recalling his time working on a Ford Motor Company assembly line, Gordy applied the assembly-line concept to his Motown artists, hiring coaches to help with dancing, etiquette, and finances to transform incoming fledgling singers and musicians into polished performers.

His hard work and ingenuity paid off – so much so that the Hitsville U.S.A. building that acted as recording studio from 1959 to 1972 is now part of this museum that has attracted thousands of people from all over the world.

On the day of my visit alone, the Motown Museum received high levels of traffic; as I was leaving, I heard a member of the staff tell walk-in visitors there weren’t open spots on a tour until 5 p.m. (it was a little after noon).

Visitor interest must at least partly account for the Motown Museum’s planned expansion in the coming years to a 50,000-square-foot exhibit space with estimated construction costs around $50 million.

It was somewhat hard to fathom that the relatively quaint-looking house I found myself standing within on that November morning was the epicenter of a musical powerhouse. It was a profound piece of history to experience – and one more reason for me to believe in Detroit being one of the coolest cities in the world. 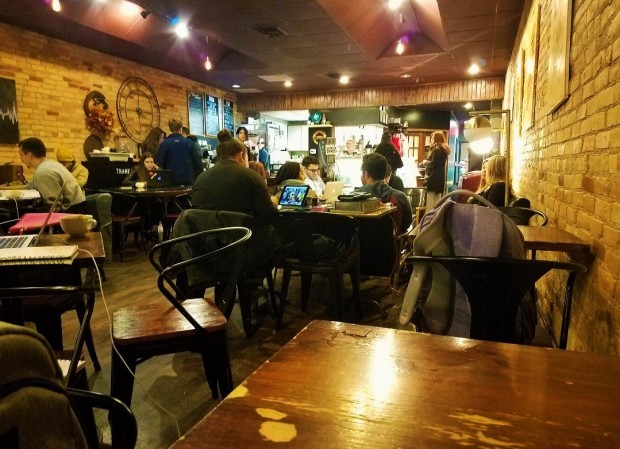 Pre-holiday coffee-shop coziness! That was what I was in the mood for when I jaunted over to Dessert Oasis Coffee Roasters in downtown Rochester on the Wednesday afternoon before Thanksgiving.

It appeared I wasn’t the only one who had that objective in mind: the coffee shop was bustling when I arrived around 3:30 p.m. The crowd almost overwhelmingly appeared to be composed of college students getting their homework on (studying the night before a holiday weekend? How ambitious!).

While it looked like I wasn’t going to find an open table in the crowded café before my order of a cappuccino and chocolate croissant came up, Fate intervened, and I was able to nab a seat at a small table.

I spent over an hour in the coffee shop, soaking in its congenial vibes whilst working on my computer and receiving a delicious infusion of caffeine and sugar via the cappuccino and croissant.

As made evident by its name, Dessert Oasis Coffee Roasters is – like me – into the sweet treats. According to its website, the cheesecake it sells slices of is made in-house daily and is offered in such intriguing flavor varieties as Banana Nutella, Baklava, and Tiramisu. Cookies, savory puff pastries, and other baked goods (including vegan desserts) are also sold.

I’ve heard Dessert Oasis periodically offers live music, as well. I would love to come back on a performance night and incorporate that into the experience  – although the inviting ambiance, gracious staff, and delicious food and drink that characterized this visit are in themselves more than enough to warrant a return.

(With additional locations in Detroit and Royal Oak) 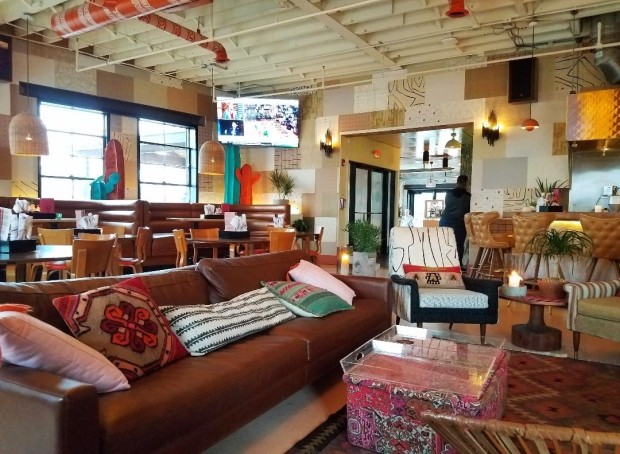 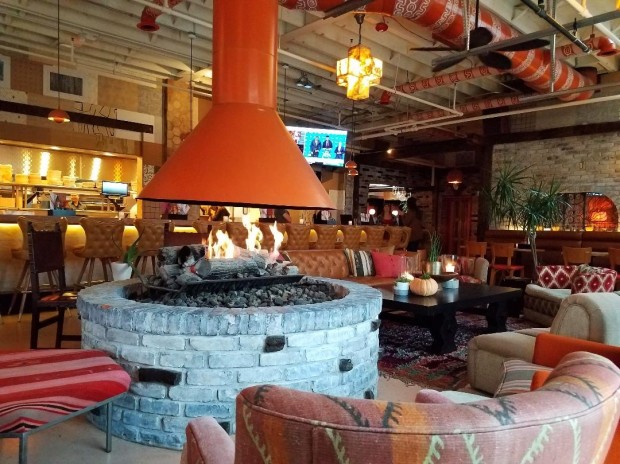 Gran Castor: you WOW’ed me!

It’s always thrilling to dine at a new-to-me restaurant I’ve been looking forward to trying and have it exceed my expectations. That’s what Gran Castor, the latest opening by the Union Joints restaurant group (which also owns local faves the Clarkston Union, Union Woodshop, Vinsetta Garage, Honcho, and Fenton Fire Hall) did when I visited it on a Tuesday evening several weeks ago.

Remember what restaurant was previously located at the intersection of Big Beaver and Rochester roads in Troy? That’s right: a Hooters. Now the building that housed that notorious chain-franchise purveyor of wings is Gran Castor, the restaurant/coffee bar with a gorgeous aesthetic and delectable cuisine.

Check out the above photos of Gran Castor’s dining area, complete with pleasing pops of color, mod Southwestern vibes, cozy seating areas, and eye-catching fireplace-in-the-round. Is it not STUNNING? I immediately felt a boost of happiness when I settled into that bright, beautiful, welcoming space for an after-work dinner with a friend.

Gran Castor’s food menu reminds me of that of one of its sister restaurants, Honcho of Clarkston. While the overall vibe of the cuisine is Latin, ingredients of Asian origin are prevalent in dishes such as fried chicken tacos with a “spicy soy fish sauce glaze” and a rice bowl including “kimchi house pickled jalapeño and carrots.”

It becomes even more apparent what a fusion menu Gran Castor’s is when you check out the pizza section and see how many traditionally Latin ingredients are included in the offerings there: see the Papas y Chorizo pizza with its chorizo sausage, mole rojo, and salsa criolla and The Mallmann with its chimichurri sauce and queso fresco.

For my entrée, I went with a relatively un-fusion-y offering: the Gran Castor Burrito stuffed with pulled pork. With its tender meat, smoked cheddar cheese, black beans, cactus pico, lettuce, and queso sauce, plus sides of refried beans and cilantro-lime rice, it was incredibly flavorful and satisfying.

I saved half of the large-and-in-charge Gran Castor Burrito to take home and looked toward the dessert menu. My friend and I were psyched to see that as at Honcho, that menu included fresh-fried mini donuts with chocolate and caramel dipping sauces. We opted for an order to share.

If I’m remembering correctly, eight donuts came standard with that dessert, and our server was kind enough to throw in a few more. These donuts were AMAZING: freshly fried, pillowy-soft-on-the-inside, crisp-on-the-outside decadence – especially when dipped in the rich chocolate and caramel sauces.

Our awesome server went above and beyond in offering us a top-notch dining experience, throwing in a sample of Gran Castor’s house-made soft serve for each of us, as well, and WOW – my mind and taste buds were BLOWN by how YUM that stuff was. The twisty soft serve included the cinnamony Mexican Dark Chocolate flavor and the wonderfully nuanced Vanilla-Chamomile. I loved, loved, LOVED both.

And I loved Gran Castor. From its striking interior and delicious cuisine to its stand-out service, it offered a memorable dining experience that had me super enthused about the prospect of a repeat visit (I NEED more of that soft-serve in my life!).