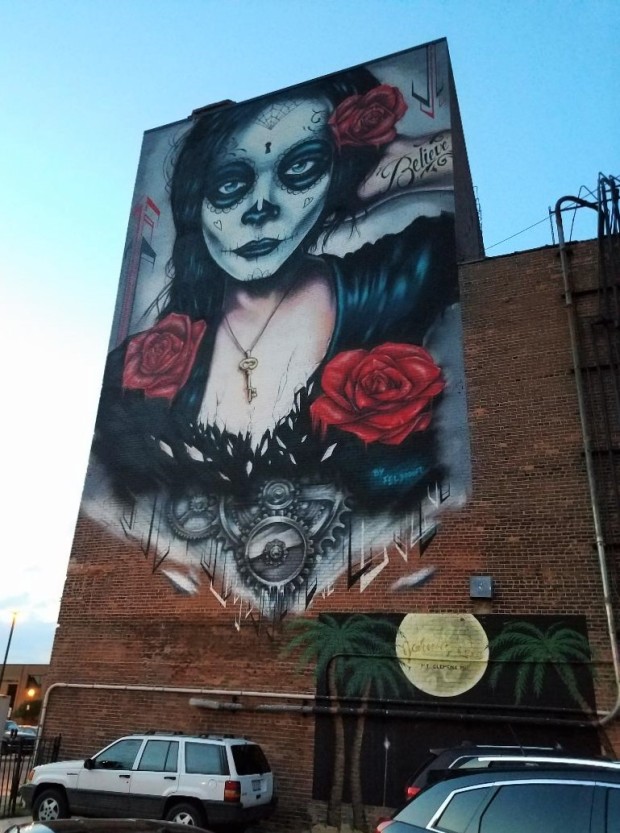 While I was volunteering at the Femmes of Rock concert at the Emerald Theatre a few weeks ago, it hit me that it was my first time visiting the venue.

Could that be possible? I asked myself. I’d grown up in relative proximity to the Emerald; it seemed crazy to me that I’d never before witnessed a concert or other live event at the popular venue located in the heart of downtown Mount Clemens. But I’ve since racked my brain, and unless I visited the place as a kiddo and have totally forgotten it, it indeed appears that this was my first time in the space. So . . . new-place time!

The gorgeous, nearly 100-year-old (built in 1921) theater is small and intimate, as you can see from the above photo of its interior; it seats approximately 1,600. According to its website, it’s been revamped in some respects since its inception; that mural on the face of its exterior obviously isn’t circa 1921, for instance (but man, is it striking!). There’s a bar in the theater area, and upstairs there’s a sleek bar space called the Rock Room open on Friday and Saturday nights that features live performances.

While I was at the Emerald in a volunteer capacity, I was able to watch the show performed that night – which was AWESOME. The performers, Bella Electric Strings – a quartet of female violinists backed by a three-piece rock band – KILLED it! The ensemble brought mad energy and skill to the classic-rock tunes they played; I highly recommend you check them out if you’re interested: www.femmesofrock.com. And of course, check out the Emerald for a live performance!