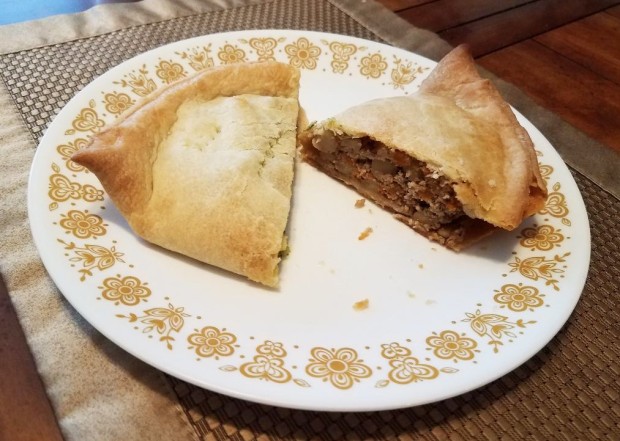 You know that place in your neighborhood that you’ve passed by for years and always meant to visit but still haven’t? That was Peppy’s for me – until I went there for the first time last Tuesday.

Peppy’s is not in my neighborhood, per say, but it’s close to where my mom and stepdad live, so I’ve driven by it a lot over the years – so much so that it feels like it’s in my neighborhood. My mom had told me that the little carryout joint made good pasties and other foods such as pizza, subs, and baked goods, and I’d long been curious to check it out.

Fast-forward to last week when, in the throes of a ravenous attack of hunger, I finally made a pit stop at the place after spontaneously deciding to pull into Peppy’s parking lot on the way to my mom’s house. New-place time!

Peppy’s neat, tiny storefront interior was dominated by glass display cases of pasties and other baked goodies, plus large overhead menus including chicken, ribs, pierogies, salads, fish ‘n’ chips, appetizer side dishes, and desserts such as seven-layer cake and baklava – in addition to an extensive selection of pizza, pasties, and grinders.

I’ve never met a piece of baklava that I didn’t like, so I knew I had to add two pieces of the pistachio variety to my order. I also picked up two of the pasties, one beef and one spinach-and-feta.

The pasties were large; cutting them in half produced two solid pie-like slices. Both were delicious! The spinach-and-feta one was especially amazing with its rich, savory filling, and the beef pasty was warming and hearty with its ground meat, cubed potatoes, diced carrot, and onion. The crust used for both was addictively good.

And the baklava! It was soooo on point, with its butter- and honey-saturated, nut-studded layers of phyllo dough (DELECTABLE!). I think I need to add “eat more baklava” to my list of 2018 resolutions – for real!

If adding more baklava to your life sounds like a fine goal to you, too, go check out Peppy’s! And while you’re at it, pick up some dinner from that extensive carryout menu (unless the baklava IS dinner, which does sound like a very fine dinner, indeed!).