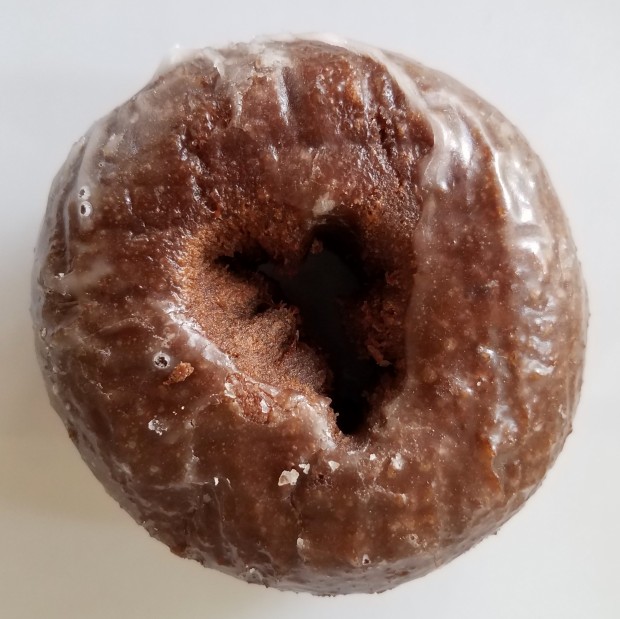 Last month, I discovered that the people at the Donut Factory – a bakery/café on Mound Road just south of 12 Mile in Warren – most definitely know what the heck they are doing when they craft their namesake pastry. For a mere 95 cents, I got in return a little nugget of Heaven named CHOCOLATE HONEY-GLAZED DONUT that was delectably crispy and sweet-honey-kissed on the outside and sumptuously soft and chocolatey on the inside. YES QUEEN!

I’m thrilled that I decided to make the detour to the Donut Factory that afternoon while en route from an offsite work meeting, because discovering one more place where top-notch baked goods are crafted makes me feel that much more equipped to deal with life (donuts are an effective antidote to have in one’s back pocket when adulting gets squirrely). I stopped there because I thought it was one of two donut shops in Warren that I have on my 100 Places to-visit spreadsheet (one of my nerdiest and most beloved creations). I realized when I looked there later that it wasn’t (the shops on my list are Donut Castle and Daily Dozen. Apparently Warren is loaded with delightful independently-owned donut shops).  I guess it was Fate that brought me to the Donut Factory – so thank you for that, Universe!

According to its Yelp profile, the Donut Factory is open 24 hours Tuesdays through Fridays (so you can get your donut fix at any time of day! Imagine donuts after a visit to another Warren gem, Dragonmead Microbrewery – NEXT-LEVEL). On Saturday, it closes at 4 p.m. and is wholly closed on Sunday (good, because the saints who make these babies deserve to live a life outside of donut cobbling). It reopens on Monday at 4 a.m.

Besides donuts, the Donut Factory offers other food, too – soups and sandwiches and pasties. You can go in there and sit in one of the booths or at the counter and enjoy a meal in a pleasant, low-key, kinda quaint environment where time feels like it is standing still – in a good way. Because time moves too quickly sometimes, doesn’t it?

But the profound thing about buying power is that we can decide which place of the two we want to support with our dollars – or whether we want to support both. It’s our choice. So the next time you’re in the 12 Mile-and-Mound area and feel like doing a little experiment, give ’em both a taste test and see what you think. For the record, my vote is with the Donut Factory.