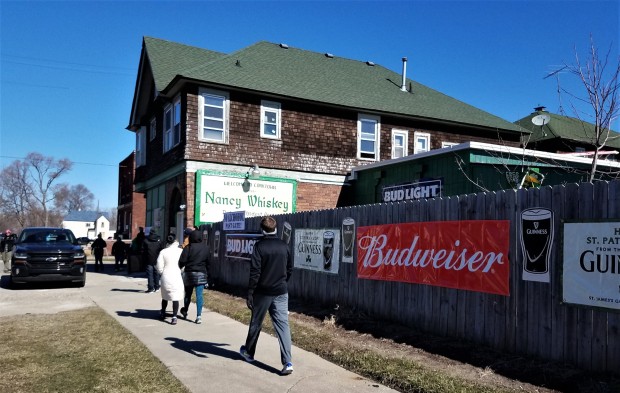 If you are looking to cut out of work early and indulge in some crazy St. Paddy’s Day non-adulting shenanigans, Nancy Whiskey is the place for you. Cuz you know this Corktown Irish bar is going crazy right about now with half-gone celebrants decked out in green knee socks and tophats and shamrock-themed face paint.

I’m not planning to go out and revel with the revelers today, but I am feeling mighty nostalgic right now for my early-to-mid-20s, when taking off work to start drinking green beer at 9 a.m. was a given. ~Sigh.~ Those were the days!

If I’m being honest with myself, though, I’ll admit I got my fill of the St. Paddy’s Day party vibes last Sunday after running in the Corktown 5K associated with the parade held annually in that historically Irish part of town.

If you’ve never been to the Corktown St. Patrick’s Day parade – held annually on the Sunday prior to the holiday – it’s definitely something you should consider experiencing at least once. It’s quite a spectacle! Just aim for a year when it’s not 40 degrees and downpouring (2016) or with temps in the teens and a bitter wind chill (this year). Crossing my fingers for a balmy 50-degrees-and-sunny experience next year!

But I digress – back to Nancy Whiskey! It’s one of the D’s oldest bars. According to its website, it’s been around since 1902! And the corned beef it served up on parade day was excellent. I’d heard good things about it from a former coworker and Corktown-parade diehard who was obsessed with getting a corned-beef sandwich from Nancy Whiskey every year, and man, it lived up to her hype. I only got one corned-beef slider, but it was loaded with an ample amount of tender, thinly-sliced meat – Mmmmmm. It was a much-needed beacon of comfort as I tried to ignore the fact that I was walking around in frigid temps in sweat-dampened race clothes (the unglamorous side of running in the Corktown 5K).