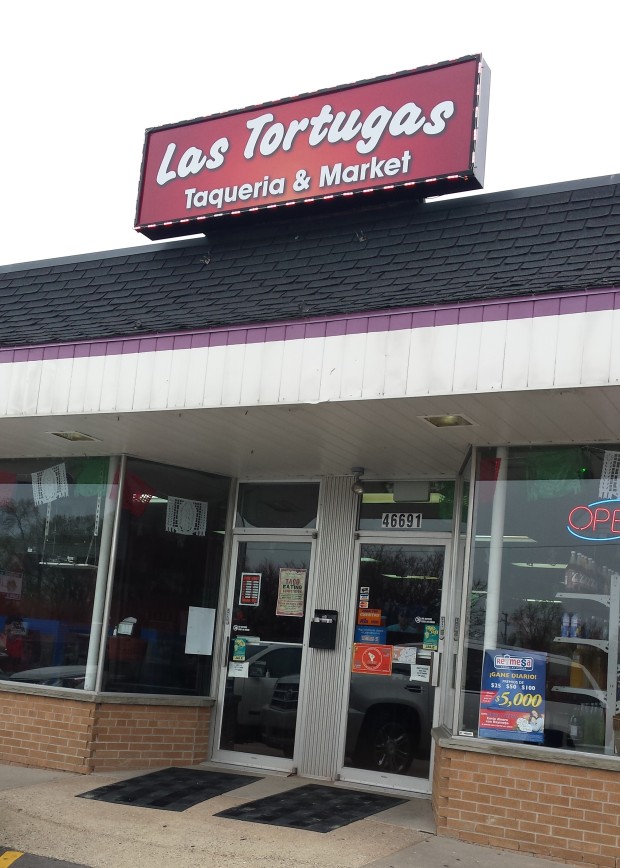 Utica represented on 100 Places in the D! Or so I thought. On Saturday, in a fit of desperation, I went on Yelp to find a new place to visit. It was the last day of April, and I needed to hit my quota of going to at least one local place located within a new-to-the-blog city a month. I’d procrastinated on it all month. Plus, I was in a lazy-day Saturday mood and didn’t want to drive far. Las Tortugas Taqueria was the first result to pop up for nearby Utica restaurants. Because it had excellent ratings, because Utica has never been represented on the blog, and because Mexican food is very high up on my Favorite Things in Life list, I decided to give it a whirl.

It wasn’t until writing this post and looking at the Mexican restaurant/market’s website that I realized that Yelp had posted inaccurate address information. Drats! I thought that looked like Shelby Township! In Yelp’s defense, when I then Googled the street address, half the resulting entries also had Utica as the city of origin. The restaurant must be right on the cusp. Still, since the business website has the city listed as Shelby Township, that’s what I’m going with. I’ll have to hit two new cities this month to compensate.

Oh, well. Life is too short to worry about exactly where on the map such phenomenal Mexican food originates. Because let me tell you, Las Tortugas Taqueria’s food is excellent! So, so, so, so GOOD. OK, I was at a high level of hangriness when I took my first bite of the tamales I’d ordered. I’d put off lunch for wayyyy too long, so that it was practically dinnertime, so any food I’d put in my mouth at that point would’ve tasted pretty great by default. But even so, this is some exceptional Mexican food! It’s the real deal. And look at how much food they give you! Look at these two tamales in the photo above – they’re huge! All that food for only $7.99! Much love, Las Tortugas Taqueria, much love. I have to be grateful for the city mix-up – otherwise who knows when I would’ve found you!

Marked by a simple red-and-white exterior sign, Las Tortugas Taqueria stands out from its neighbors in the tired-looking strip mall in which it’s located in more areas than its awesome food and great prices. Its tiny interior houses both a restaurant and a market, with seating area on the left and grocery offerings on the left. It’s impressively clean and organized and has a great vibe. It’s obviously run by people who care, and I love that as much as I love those tamales!