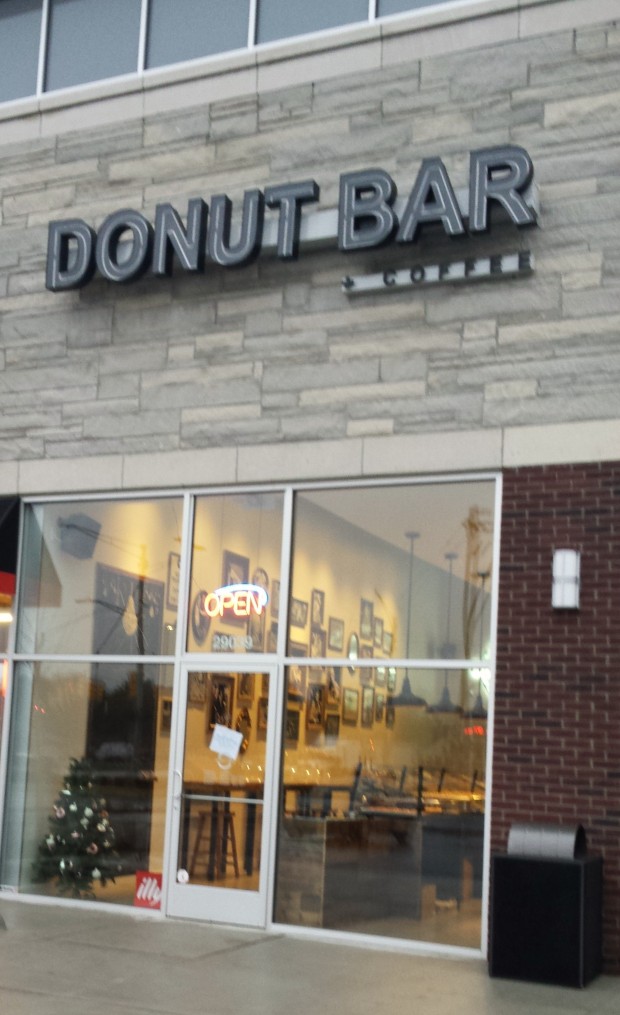 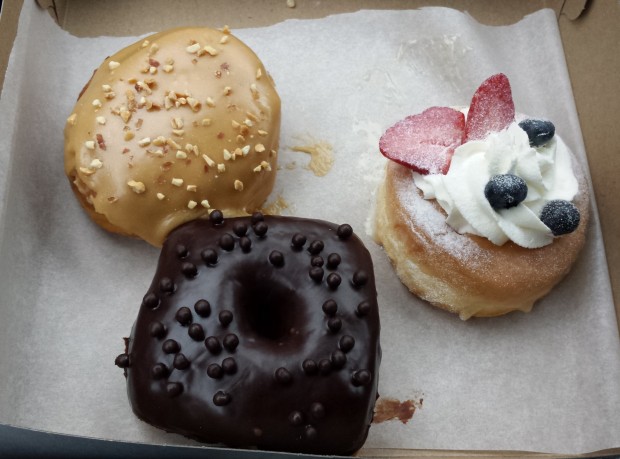 Donut Bar + Coffee = I’m OBSESSED. I was intrigued when I recently read about this specialty donut shop, which opened last summer, in an issue of Hour Detroit. Looking it up on Yelp, I saw reviews were mixed; some people were loving the donuts, and others said they were overhyped. So of course I had to go see for myself what these little fried dough nuggets were all about. The verdict? These are some damn good donuts!

OK, the tres leches one I got was PHENOMENAL. I’m more of a chocolate gal myself, so I probably wouldn’t have chosen that one if I hadn’t seen someone on Yelp raving about it. But I did not regret my choice; it was melt-in-your-mouth rich and creamy, exactly the way a tres leches donut should be. And the peanut-butter banana one! – I believe it was aptly called the Fat Elvis – that one was also amazing! It was stuffed with banana-flavored custard, slathered with peanut-butter frosting, and sprinkled with chopped nuts. Peanut butter is practically an addiction for me, so I was definitely digging that one. Even the more traditional donut I bought, the plain one with chocolate frosting and some little crispies on top, was quite good. So for me, Donut Bar + Coffee definitely lived up to the hype! I can’t speak to the coffee part of the deal, because I didn’t get one, but the donuts were glorious.

I’m really not much of a Christmas/holiday season person compared to some people. You will NOT see me putting up my tree November 1, that sacrilege against fall, my favorite season! And I pretty much throw up a little in my mouth when I see holiday decorations and plastic pine trees for sale in department stores in mid-October. But there are some things I love about the holiday season – real Christmas trees, family time, thoughtful gifts, richly indulgent dinners – and holiday decorations in bars. I LOVE holiday decorations in bars. Random, I know. But it makes them so cozy and lovely! Often the dive-i-er the bar, the better – the dive-i-ness somehow ups the festive factor.

The Rochester Tap Room is not at all a dive bar. It is definitely within the classy echelon of bars – regal, even. The menus are on frickin’ tablets! I’ve heard of restaurant menus being on tablets, but this is the first time I’ve ever handled one. I have to say, I prefer the traditional cardboard menu for ease of use; I swipe enough on my phone every day. But if there is a menu that should be encased on an electronic device, I would say this would be the one. The beer menu is impressive! Rochester Tap Room currently boasts 61 craft beers on tap! They’ve also got a pretty nice wine menu, plus a food menu that features hearty bar fare such as a pulled pork sandwich (the Pig Out) with bacon gloriously interlaced on top of the pulled pork, because why in the heck not? And they sure knew how to decorate for the holidays. Check out all of the gloriously beautiful heartwarming festiveness in these photos! 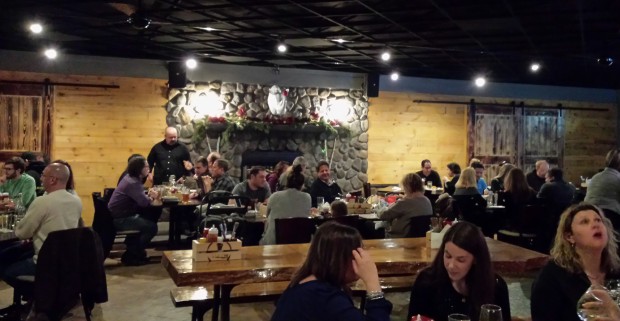 Chicken ‘n’ waffle! Poutine! Roasted root salad! The large and impressive menu of the recently opened Fork n’ Pint in Waterford boasts numerous rich-and-cozy comfort-food dishes. You need a hearty, substantial meal to go with all of those craft cocktails and beers you’ll be consuming in the confines of the cozy, cabin-esque establishment. (OK, I am sensing a theme with cozy for me here. I am in flannel pajamas and drinking tea with a candle warmly burning next to me in the dead of winter, so cozy is kind of my jam right now).

I probably didn’t need to be gorging on fried chicken, waffle, cheesy grits, and fries loaded with gravy and cheese curds the night after two days of holiday celebration and all of the festive eating that entails, but well, why not? Why not continue the glorious, fat-drenched revelry? After all, this was a special dinner. I reconnected with some friends I worked with years ago, who I’ve kept in decent touch with but who at most I only see one to two times a year. Our workplace was one of those one-of-a-kind office environments with one-of-a-kind people who you will never forget, and friendships forged that allow you to pick up exactly where you left off and to reminisce about hijinks surrounding the old joint and to cackle with glee over the gossip. Old work-joint gossip is possibly the best kind of gossip! And poutine is my jam! So I was pretty content with my visit to Fork n’ Pint. And I’d love to go there again to try out more of that delectable-looking menu.

On December 10, I visited the tiny, cutesy-nostalgic Parks and Rec Diner in downtown Detroit, but I wasn’t there to scarf down some biscuits and gravy or some of its other scrumptious-sounding breakfast fare. I was there for a very special dinner – a pop-up dinner to benefit an awesome local farm, Melo Farms! It is a Yale-based pig farm run by a husband-and-wife team who raises a heirloom breed one hundred percent the humane way: truly free-range, organic, grass-fed, and treated with compassion. Melo Farms has been holding monthly pop-up dinners hosted by different chefs and at different venues in the Detroit area to help raise money for a new tractor. December’s dinner was crafted by the young and talented Chef Larissa Pope, who had us dining on five courses featuring various components of Melo Farms’ pork, including:

-A mixed greens salad with rich and crispy jowl bacon, a fried egg, pomegranate seeds, and a bacon fat and apple cider vinaigrette!

-Pork pâté (my first experience with pâté!) arranged in a lovely plating with a cranberry Cumberland sauce, pickled mustard seeds, and toasted brioche!

Both seatings of the dinner – we went to the earlier one – were sold out, but given the size of Parks and Rec, ours was a small, intimate-feeling affair. The five-course meal was inventive and delicious, and it felt great to support a farm that is doing the good work and raising its animals well.

To learn more about Melo Farms (which sells its cuts of pork every Saturday at Eastern Market) and to get on its mailing list to become aware of future pop-up dinners, check out its site: www.melofarms.com

and to scope out Parks and Rec’s menu (which looks delicious in its own right), head over here: www.parksandrecdiner.com

Parks and Rec is located in the GAR (Grand Army of the Republic) Building, right next to Republic, at: 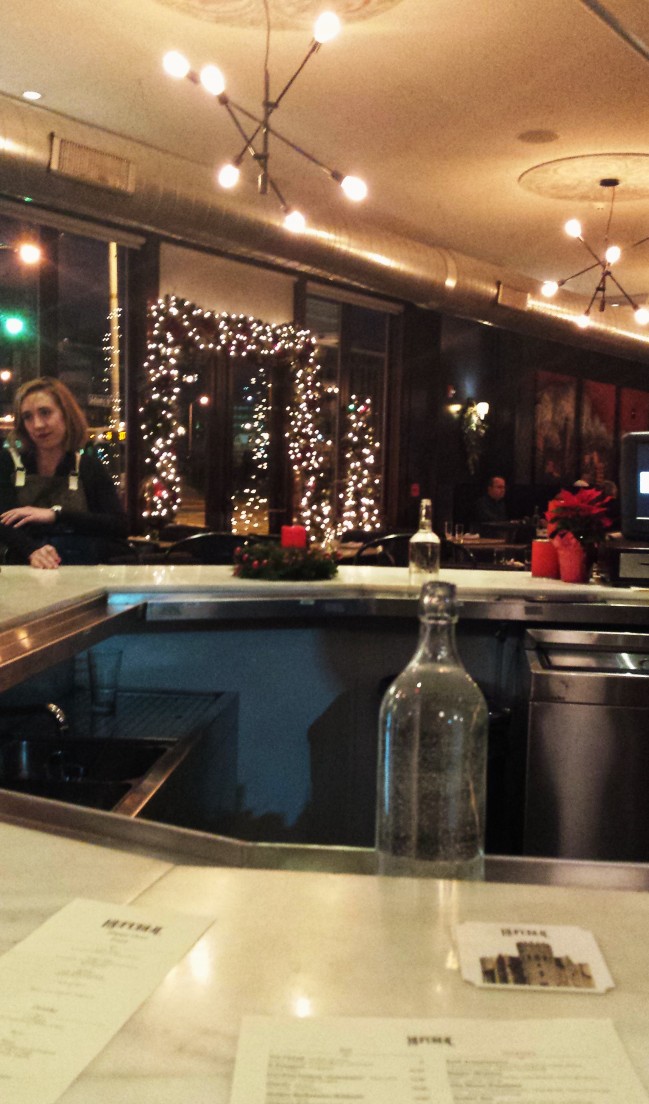 I fell in love with Republic the moment I walked into it. It was so classy and lovely and grand. And I was simply there to have a drink! If it weren’t for the fact that I was about to attend a very special pop-up dinner next-door at Parks and Rec (which I’ll write about in my next post), I surely would’ve stayed for dinner. The food menu looked quite intriguing (current offerings include handmade pierogies, braised beef shortrib, and a confit rabbit leg accompanied by “tomato water cous-cous, smoked yogurt, roasted yellow beets”), and I love its farm-to-table approach. Plus, I’ve heard amazing things about its cuisine. And the drink I had was delightful. I can’t for the life of me remember the name of it, but it contained whiskey and was whimsically old-fashioned and was another component that made me feel grand. OK, perhaps the word “grand” subconsciously keeps coming to mind because Republic is located on Grand River Avenue and is located in the Grand Army of the Republic building, that massive, impressive, castle-y-looking behemoth of a building (complete with turrets!) that was recently restored after years of renovation work. Check out the before-and-after photos on gardetroit.org; they’re another example of the ultra-inspiring work that has gone on in recent years to restore Detroit to its former glory! “Former glory” – that’s not quite the right phrase. It’s more a melding of the old and the new, of rich history and contemporary creative exploration, and I find it just so . . . fucking awesome. It doesn’t get more eloquent than that.

I am not a hipster, and I am not someone who owns a record player, but I often fancy myself as the type of person who could someday be both of those things. I like many hipster-y things, and I love the idea of being a person who owns a record player. Records, for me, are whimsical relics of the past. They remind me of my childhood and my dad’s record player and his vast collection of albums with their often-puzzling covers (The Rolling Stones’ Some Girls always intrigued me) and the lovely little scratching noise the needle of the record player makes when it hits the vinyl. Except it was always so annoying to try to find the start of a particular song. I don’t miss that part. Or when a wonky record started to go all haywire and start skipping and going cray-cray. Anyway. I love hearing when successful hometown folks come back to support Detroit. So I was happy to hear that Jack White had opened a Third Man Records store in Midtown, right next to good ol’ JP (Jolly Pumpkin!). I’m not a Jack White aficionado, but he seems like a cool dude, and I admire his talent and his unremitting creativity, so I was eager to check the place out.

The inside of the store is impressive – very visually engaging, and bedecked with carefully arranged displays of records, t-shirts, and other merch. And a self-recording booth where you can make your own record (sold out on my visit there)! But my favorite part? The listening booths! Ok, no self-respecting music store is not gonna have listening booths, but how many of them in this day and age have vinyl-centric listening booths where you get to handle and listen to real records? Probably more than I know of with the recent resurgence of vinyl, but still, it’s just cool.