Thursday night before six p.m. when I walked into Griffin Claw Brewing Company, the revelry was already in full swing. What a great atmosphere! I loved its wood-bench communal seating, colored lights, and vibrant banners hanging on the ceiling. And of course, there’s its wide selection of brewed craft beers – and its rich, heavy bar food to soak it all in (like my delightfully saturated-fat-concentrated meal of fried gouda mac-and-cheese bites and applewood bacon grilled cheese with french fries). 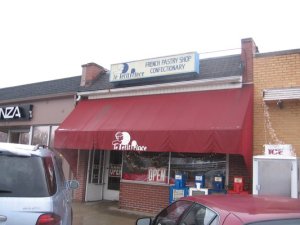 Le Petit Prince! This amazing gem of a bakery is located in an incredibly nondescript strip mall next to a gas station, so nondescript that I totally passed it despite using GPS. But oh, how I am hooked! The almond croissant – out of this world! Just f@ckin’ awesome. And the chocolate one, the pain au chocolat, was delicious, too. And I loved how incredibly, charmingly old-school authentic it all was. The older woman with the French accent who served me, presumably one of the owners, told me that it’s a family-run business that has been around since 1979 – that’s how you know it’s legit! It’s so old-school that it doesn’t take credit or debit cards, just cash and checks – so heads-up on that. But I just loved it. Those pastries were so delicious that I forgot to take a picture of them before I ate them! And alas, I didn’t take a picture of the bakery. So the photo above is one I found on Yelp.com, taken by user Libby F. 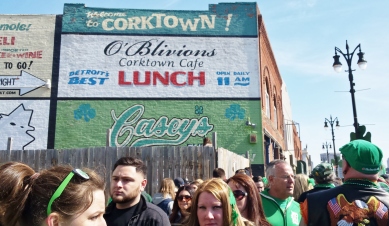 Another fun little Irish bar that exudes an old-school charm. I’m pretty taken by Corktown at this point – and I definitely plan on coming back this summer and doing more bar-hopping.

This was our first stop post-race, when we were all psyched up and invigorated and sweaty. Thank God for the tutus to doll up the running apparel!

I’ve been wanting to check out Gold Cash Gold for several months now, ever since I found out it had opened. It’s in a building that was formerly a pawn shop, and they decided to keep the name. All the tables were taken out on this day to accommodate the crowds, but I liked what I saw. It’s all bright white walls and stained glass and wood – very light and relaxed and welcoming. I will have to write a postscript whenever I go in there and actually order food, because I am curious about the menu. It looks very interesting, and I definitely have an affinity for menus that veer off the beaten path. 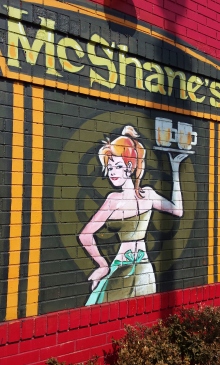 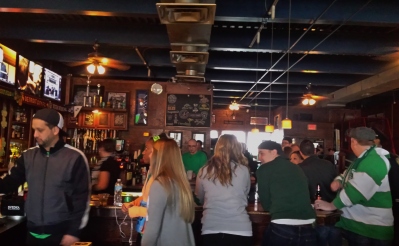 Sunday was a glorious day of running and reveIery. Yes, I went downtown to run in the Corktown 5K – and to celebrate my friend Jaclyn’s birthday. After a night of drinking and insufficient sleep, we were both so proud of ourselves for running the whole thing without stopping once. We felt like champions – 33-minute champions! That was our time. Ok, so Nike is not going to be calling us anytime soon to sponsor a new line of running shoes or anything, but it felt impressive to us.

McShane’s was our first stop, pre-race. It was a pretty no-frills bar – but I do have a fondness for no-frills bars. And it was Irish. And the small trace of Irishness left in my genes (the Floods immigrated over here in the 1800s, so it’s pretty diluted by this point) enjoys anything Irish.

Meeting a friend in Berkley at Republica Friday made my alternate route home from work up Southfield Freeway finally feel justified (94-East tanker-explosion shutdown – what what!). I got to have one of the most excellent bacon grilled cheeses of my life! And some amazing french fries seasoned with lemon juice and oregano and topped with crumbled feta cheese (out-of-control good!). And some deliciously fancy cocktails and craft beer! So I think you can guess by now that Republica is a big yes in my book. Based on decor alone, it was probably already going to be a yes (check out the Ernie Harwell painting and all the Wings memorabilia), but of course amazing food and drink helps.

This weekend felt like the end, didn’t it? The END of winter! Or the beginning of the end, at least. I seriously think I saw a Mustang with its convertible top down today. It was directly behind me, stopped at a red light, so I couldn’t quite tell, but it looked like the female passenger’s hair was blowing in the breeze – all balmy 39 degrees of it. Ah, heat waves in Michigan in March. I must admit, above-freezing temps feel glorious! And they’ve gotten me excited, inspiring thoughts of getting out there again, further afield and more frequently, to visit more new and awesome places here in the Metro-Detroit area.

But the weekend didn’t start so balmy. Did you go out Friday night? I did, and I froze my ass off just walking the couple of blocks from my car to Vinotecca in the bitter, high-velocity winds. It was winter, refusing to go out without a fight! But Vinotecca’s glorious happy hour was well worth it. And because I have been sucking so bad at visiting new places this last month, I convinced my friends to slide over to Bastone afterward so I could enjoy one of their craft brews. I think it’s kind of funny how Bastone, Vinotecca, Monk’s Beer Alley, and Craft are all connected like this crazy little restaurant labyrinth. But that was perfect on a night like this, because it meant I didn’t have to set foot out that door and into the elements until I absolutely had to!

Bastone has a good ambiance; it’s handsome yet cozy and unpretentious-feeling. Sounds like the recipe for a good boyfriend, too – quite possibly found drinking a craft beer at the bar rail of Bastone!