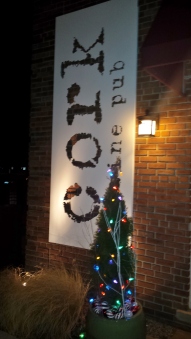 Happy hour runs all night at Cork Wine Pub on Mondays, so how could I not go this evening? It’s a cozy space to enjoy some excellent (and affordable) happy-hour small plates and a bottle of one of the over 100 wines served. An exquisite-looking dinner and weekend brunch menu are offered, as well.

Shown here is a corner of the 1870s reproduction of Sanders Confectionary, where its beloved hot-fudge sundae only cost 10 cents!

I didn’t even know the Detroit Historical Museum existed until some time in the recent past. Why in the heck did I never go on any school field trips there? My elementary school took us to the Science Center about a jillion times . . .. I know astronaut ice cream is awesome and everything – I’m just suggesting it might lose a little of its luster after a kid’s third visit in about as many years.

The Detroit Historical Museum is definitely worth at least one visit. What a great place for a family trip – it’s fun and educational and FREE admission. (How often is stuff to do with kids free?) And while I’m only a gradeschooler at heart these days, I still found it absorbing enough to spend almost two-and-a-half hours following the history of the D through its journey from a French trading post to a majorly populated American manufacturing hub to a city gravely wounded by racial tensions, crime, and blight to, finally, a survivor-town invigorated by ingenuity, resourcefulness, and reinvention. This story is illustrated by several floors of displays, including the Streets of Old Detroit exhibit, where visitors can walk into and explore reproductions of mid-19th- and early-20th-century city businesses, and the Allesee Gallery of Culture, which thoroughly explores Detroit’s 20th-century rise and fall and rise again through a myriad of artifacts, from a bronzed Joe Louis glove to a Bob Seger guitar. I experienced numerous teary surges of civic pride as I explored the rich history and was reminded how great this area really is. 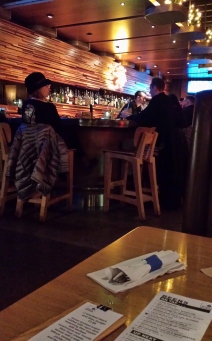 Stepping inside The Emory felt like stepping inside a room in my own mind – the vibe was just that me-ish (and they were playing so many gloriously amazing ’70s soft rock songs the night I was there, which was totally up my alley). I loved all the woodwork and the shades of brown; it just held a good aura for me. Ok, that is probably the most hippie-ish description anyone has every given about this place. Long story short, the joint has good ambience. And the hot butter-rum seasonal drink I ordered was delightful. I wish I could just hole away in one of the booths and butter-rum-drink the winter away.

I’ve been wanting to try this place for months now. MiChigo offers Chicago-style, specialty deep-dish pizzas. Check out the adorably tiny personal deep-dish pizza I got. I absolutely devoured it.

What a little gem this place is. The Book Beat is one of the rare independent bookstores that continues to thrive. Wind through its shelf mazes and browse its carefully curated collections of new and used tomes, being careful to dodge the occasional box of books scattered about on the floor (they just add character!). Several people who appeared to be regulars filtered in and out during my short time here, which made me happy, because it illustrated that bookstores like this are not only places of commerce but places of communion, too (take that, Barnes & Noble!).

I was super excited when I saw advertisements for the Better Health that recently opened on Hall Road in Shelby Township. Finally, a Whole-Foods-ish store in my neighborhood! I’d never heard of Better Health before this, but it’s a Michigan chain, with 13 other locations in the state, most of which are focused in the Metro-Detroit area. The Shelby Township shop is a beautiful shrine to natural-clean-foodie-organic goodness – the kind of place I could spend way, way too much money in. 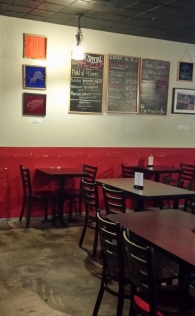 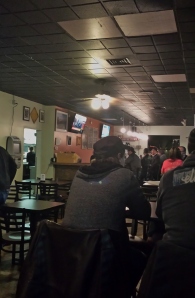 Falling Down Beer Company is a East-Side brewery with a bar area that looks like a conglomeration of all the dive bars and frat-boy basements you passed hours getting wasted in during your college days of yore. The music played – 90s rap and hip-hop – helps to further set the scene (and reminds you that Biggie Smalls is pretty awesome to drink to – and why isn’t he played more these days?). And yeah, the beer is pretty damn good, too. 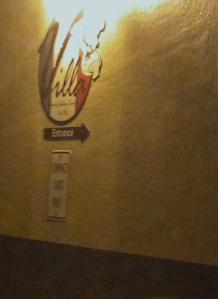 Sure I’m biased, but in my opinion, if you’re going to go anywhere for Italian in this state, you’ve got to hit the East Side of Metro-Detroit. The best Italian places you’ll find in the area are concentrated in Macomb County. Villa is another example of a family-run establishment featuring delicious, authentic food made with love. My one-quarter-Italian stomach heartily approved of the veal parmesan. 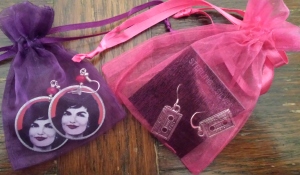 After months and months and months of meaning to hit the Rust Belt Market on the weekend, I finally did last Saturday (on Small Business Saturday, appropriately enough). And I have to say, it’s pretty fantastic! If you love handmade stuff and antiques sold by local vendors like I do, then this place will be heaven for you.

This is just a great place to visit if you’re trying to avoid being generic in your holiday gift-giving. Uniquely flavored handmade chocolates, one-of-a-kind jewelry, handpainted mugs, and Michigan-themed T-shirts emblazoned with quips like “Bitch, please. I’m from Detroit” are just some of the many wares featured in a space referred to on its website as a “once defunct big-box store.” It makes me so happy to know that a formerly corporately owned space is now a market for artistically-minded independent entrepreneurs.

(Open Saturdays and Sundays, with additional dates during the holiday season, plus a small boutique open Mondays thru Fridays; check the website for specific dates and times)